Replacing Carbon Black with MWCNT Nanomaterials in the production of Tyres 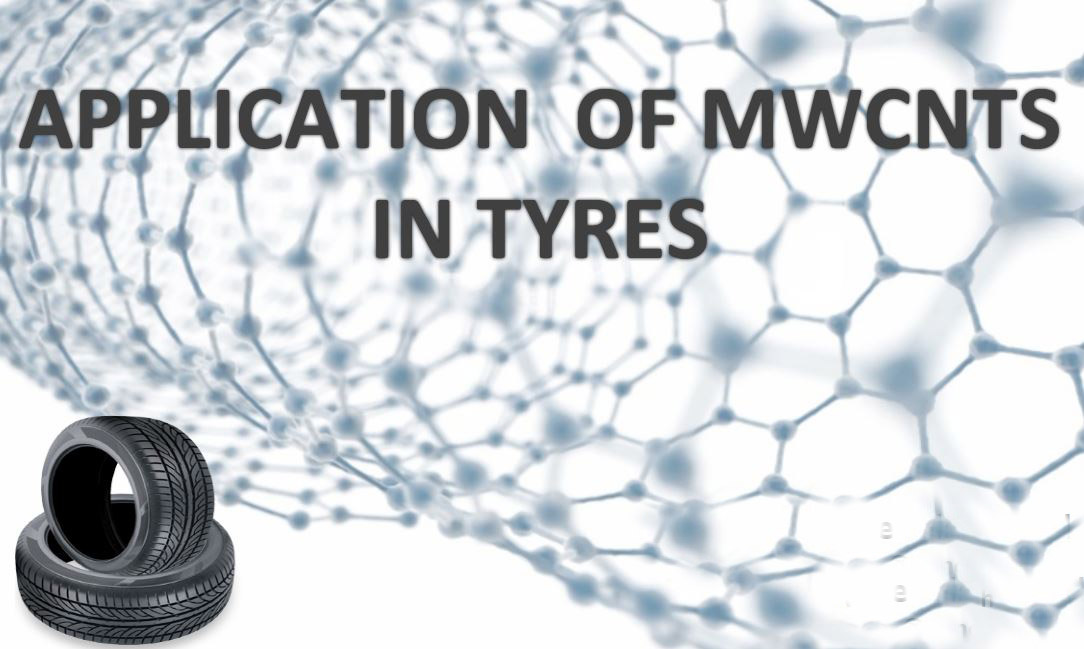 After spending several years providing the tyre manufacturing industry with consultancy, research and materials supply – we feel we are in a leading position to offer the tyre industry the support it needs to introduce nanomaterials into the production process of vehicle tyres.

In the past Carbon Black has been used as a filler – but this is not ideal for reasons of lack of functionality and its impact on the environment.

Whilst we are not in a position to reveal all the results of all our research (due to non disclosure agreement restrictions) we can offer some free guidance.

The fire-resistant wallpaper is made from environmentally friendly materials found in teeth and bones which can detect heat. When it detects heat, the non-flammable material is transformed from an electrically insulating state to an electrically conductive one.

Researchers in Shanghai led by Professor Ying-Jie Zhu published a paper outlining this new technology and how it could enhance safety.

The wallpaper differs from past forms which are usually made of highly flammable materials like cellulose. Traditional wallpaper is often a leading cause of the spread of house fires.
How Fire-Resistant Wallpaper is Created

The wallpaper is based on hydroxyapatite. This is the main inorganic component of bone and teeth. The researchers found that by forming ultralong nanowires, the typically brittle material can be made flexible. This made it suitable to be made into wallpaper.

The researchers also used an ink-based thermosensitive sensor in the creation of the wallpaper. This “smart material” is capable of setting off an alarm in response to fire. It is also what makes the paper non-flammable.

This sensor is fabricated into the wallpaper using a graphene oxide ink. At room temperature, this is electrically insulating. When it is exposed to heat, oxygen-containing groups are removed. This makes the material highly conductive. When the sensor begins to conduct electricity, the alarm sounds.

The new device, classified as a bolometer, has a fast response time and, unlike most other bolometers, it operates over an extensive range of temperatures. With a relatively low cost and simple design, this device could be scaled up, enabling an extensive range of commercial applications. Researchers have described a graphene-based radiation detector in this week’s edition of Applied Physics Letters, from AIP Publishing.

The discovery of graphene in 2004 was expected to herald a completely new type of technology. “But unfortunately, there are some strong fundamental limitations for this material,” stated Grigory Goblin of Chalmers University of Technology in Sweden. “Nowadays, the real industrial applications of graphene are quite limited.”

Graphene – made up of single sheets of carbon atoms that produce a flat, hexagonal lattice structure – has been employed chiefly for its mechanical properties.

“But our device shows that more fundamental properties can be used in actual applications,” Skoblin said. The new bolometer is based on the thermoelectric properties of graphene. Radiation heats part of the device, prompting electrons to move. The displaced electrons produce an electric field, which develops a voltage difference across the device. An essentially direct measurement of the radiation is thus provided by the change in voltage.

Other devices depend on the generation of electrical current or resistance change brought about by incoming radiation. However, measuring changes in current or resistance need an external power source in order to generate an initial current. According to Skoblin, the mechanism is considered to be much simpler than in other bolometers.

The piece of graphene in the new bolometer is small, hence it is one of the fastest bolometers as it heats up and responds in a rapid manner. Additionally, the device continues to be sensitive to radiation at temperatures up to 200 oC. Standard bolometers usually operate only at cryogenic temperatures.

Other researchers have earlier made graphene bolometers, with improved properties than this new device, however, these models comprise of a double layer of graphene, allowing them to be more difficult to scale, Skoblin said.

Another benefit of the new device is its coating. The researchers earlier developed a method to coat graphene with a dielectric polymer known as Parylene, which offers a good balance of scalability and performance. It is possible to get a better performance by coating with hexagonal boron nitride, Skoblin said, but it is difficult to obtain and the coating techniques are hard to scale up. Other studies indicate that a bolometer with hexagonal boron nitride coating would be less efficient.

The prototype bolometer functions only with microwave radiation at 94 gigahertz, but future designs will indeed widen the frequency range. The researchers next plan to make the device employing chemical vapor deposition to grow bigger pieces of graphene, making way for mass production.

A team of chemistry researchers based out of the University of Sydney Nano Institute, led by associate professor Chiara Neto, has devised antifouling surface coatings that do not contain any toxic components, using the surface structure of a carnivorous plant as inspiration.

The need for alternative antifoulants has been on the rise since the ban of tributyltin, a toxic antifouling agent that was commonly used in the past.

The carnivorous Nepenthes pitcher plant, the research team’s inspiration, traps a layer of water on the tiny structures around the rim of its opening, noted The University of Sydney. This creates a slippery layer that causes insects to aquaplane, at which point they slip into the “pitcher” and are digested.

By stopping the initial adhesion of the bacteria, the coating in turn inhibits the formation of a biofilm and the further growth of marine fouling organisms.

Lab tests demonstrated that these surfaces resisted much of the fouling caused by a common strain of marine bacteria. In comparison, layers of Teflon that went untreated by the coating were completely fouled. To ensure the coating’s ability to hold up under a variety of conditions, the research team also tested the coating in contact with the surface of the ocean.

For this, test surfaces were attached to swimming nets at Watsons Bay baths in Sydney Harbor for seven weeks. Even in this environment, the coating still resisted fouling.

The coatings are also transparent and moldable, which can be useful for underwater cameras and sensors, noted the University of Sydney.

The new coating uses ‘nanowrinkles’ inspired by the carnivorous Nepenthes pitcher plant. The plant traps a layer of water on the tiny structures around the rim of its opening. This creates a slippery layer causing insects to aquaplane on the surface, before they slip into the pitcher where they are digested.

Nanostructures utilise materials engineered at the scale of billionths of a metre — 100,000 times smaller than the width of a human hair. Associate Professor Neto’s group at Sydney Nano is developing nanoscale materials for future development in industry.

Biofouling can occur on any surface that is wet for a long period of time, for example aquaculture nets, marine sensors and cameras, and ship hulls. The slippery surface developed by the Neto group stops the initial adhesion of bacteria, inhibiting the formation of a biofilm from which larger marine fouling organisms can grow.

The interdisciplinary University of Sydney team included biofouling expert Professor Truis Smith-Palmer of St Francis Xavier University in Nova Scotia, Canada, who was on sabbatical visit to the Neto group for a year, partially funded by the Faculty of Science scheme for visiting women.

In the lab, the slippery surfaces resisted almost all fouling from a common species of marine bacteria, while control Teflon samples without the lubricating layer were completely fouled. Not satisfied with testing the surfaces under highly controlled lab conditions with only one type of bacteria the team also tested the surfaces in the ocean, with the help of marine biologist Professor Ross Coleman.

Test surfaces were attached to swimming nets at Watsons Bay baths in Sydney Harbour for a period of seven weeks. In the much harsher marine environment, the slippery surfaces were still very efficient at resisting fouling.

The antifouling coatings are mouldable and transparent, making their application ideal for underwater cameras and sensors.

Materials provided by University of Sydney.

Cutting-edge research has shown that iron-platinum nanoparticles – a promising next-generation data storage material – respond to laser pulses by stretching and contracting, according to a new report published in the journal Nature Communications.

Magnetic data storage devices are popular for storing data in almost all aspects of our digital life. While they are likely going to remain vital for the near future, existing technologies are nearing their technical limits. Today’s hard disk drives, for instance, can reach storage densities of many hundred billion bits per square inch and future magnetic devices aren’t projected to exceed much greater than a trillion bits per square inch. New advancements are necessary to take magnetic information storage to the next level. Facing ever-growing demands for data storage, hardware engineers are trying to optimize the density with which these medias can store data.

In the new study, researchers took a major step in the direction of new magnetic storage devices by showing that laser pulses could demagnetize iron-platinum nanoparticles in less than a trillionth of a second, triggering atoms in the material to squeeze together in one direction and stretch apart in a different direction.

The outcome offers the first atomic-level information on the mechanical strain referred to as magnetostriction, which happens when the magnetization is altered in magnetic materials. The phenomenon appears in many ways, including the audible hum of transformers. Prior to the study, the study scientists had thought that these structural shifts occur fairly slowly. However, the new research indicates that ultrafast processes could have major practical implications.

Study author Hermann Dürr, from the Stanford Institute for Materials and Energy Sciences (SIMES), said models of iron-platinum nanoparticle behavior did not predict the fast, fundamental atomic motion seen in the study.

“Although we don’t yet understand the full ramifications of these processes, including them in our calculations could open up new pathways for the development of future data storage technologies.”

Co-author Eric Fullerton, director of the Center for Memory and Recording Research at the University of California, said one promising application of the new research involves heat-assisted magnetic recording in hard drives with nanosized grains of materials like iron-platinum.

To reach their conclusion, researchers directed a brief laser pulse onto the nanoparticles, which measured around 50 atoms in diameter. Using femtosecond X-ray flashes, the team was able to see how the laser altered the magnetization of the material, from totally magnetized to mostly demagnetized.

The team repeated the experiment using an ultrafast electron diffraction (UED) instrument, an electron microscopy device that uses a pulsed beam of highly energetic electrons. With this technique, the researchers essentially created a stop-motion movie that revealed how atoms in the nanoparticles reacted to the laser light.

“Only the combination of both methods allowed us to see the full picture of the ultrafast atomic response to laser light,” co-author Alexander Reid, a researcher from SIMES. “The laser pulse alters the magnetization in the material, which, in turn, drives structural changes and causes mechanical strain.”

Xijie Wang, head of a UED initiative at Stanford University’s SLAC National Accelerator Laboratory, where the study was conducted, said the research also showed the power of combining these two analytical methods.

“The high-energy electron beam was absolutely crucial in the determination of the 3-D atomic motions and without X-rays, we wouldn’t have been able to link these motions to the material’s magnetic behavior,” Wang said.